Actively respond to the power shortage 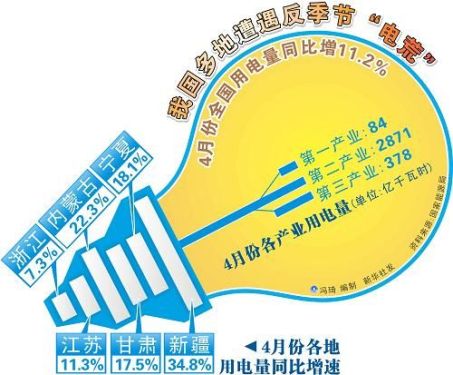 Large area power shortage
Since entering the first quarter of 2011, there are 15 provincial-level power grids in the country. Surprisingly, during the off-season period of electricity use, there has been a power shortage. Industrial enterprises in many provinces, including Hunan, Chongqing and Zhejiang, are not allowed to accelerate their horsepower. No power cuts. According to relevant media reports, â€œThis year is the most intense year for electricity supply and demand in recent years, and the total electricity gap may exceed the worst in history in 2004.â€

One of the author's friends in chemical fiber business in Chongqing said that he had experienced labor shortage just a few years later, and now he is experiencing a shortage of electricity. Some time ago, the local government imposed power restrictions, and all SMEs can only start two days a week. Now they can only open half of the production line during the day, and the peak load can be produced at full capacity in the evening. And in the production process, sometimes suddenly encountered power failure, the production line was forced to stop and said production equipment is also damaged.

For enterprises, the loss of blackouts is heavy

At present, the industrial power consumption is 0.9 yuan/kWh, but the diesel power generation cost is 1.5 yuan to 2 yuan/kWh. In addition, the power generated by the diesel engine is extremely unstable and can only be used for the production of some primary products and cannot be used for finishing. For many companies, if it is not for the sake of catching up with the progress of production, it will not choose to use such diesel engines that spend more money, cause pollution, and use more energy to generate electricity.

For dyeing and finishing companies, if they suspend production for a long time, not only will the company suffer losses, but a large number of upstream garment companies will also suffer losses. It seems that the impact of "power cuts" has affected the upstream and downstream industries of the companies involved.

Affected by the earthquake, 32 out of the 54 nuclear power stations in Japan have been shut down. It is expected that up to 42 vehicles will be shut down. Nuclear power generation originally accounted for about 30% of Japan's total power generation. Now that nuclear power plants are out of service, there has been a significant power gap. Even if the construction of thermal power stations is recently completed, it will be difficult to fill all of them. In the first month after the earthquake, Tokyo and surrounding areas had implemented "planned power outages," and local businesses and residents had at least three hours of power outages every day.

The energy saving measures of enterprises have their own characteristics. The first way is to introduce energy-saving equipment. The second way is to adjust the vacation and working methods. The Japan Automobile Industry Association proposes that automobile manufacturers should be closed every Thursday and Friday from July to September, and work on Saturdays and Sundays. Toshiba decided to increase the working days of May and October to increase rest days during the summer. The third way is to transfer equipment and production. Honda decided to transfer some models and production bases from the Kanto area to the Kansai area. Fujitsu decided to transfer some of the development equipment in the Tokyo area to other areas.

How should China deal with the power shortage

2011 was the first year of the â€œTwelfth Five-Year Planâ€. Many SMEs were once again faced with frequent power cuts. Experts pointed out that the problem of â€œpower shortageâ€ was actually caused by the fact that the extensive mode of economic growth has not changed. Today, government departments are still more concerned about the speed of economic growth. There are still many large-scale energy-occupying projects launched across the country. In the long run, they are not sustainable, but they also put great pressure on society.

Therefore, in order to solve the electricity shortage, in addition to trying to increase the supply of electricity, we must start with a fundamental approach to promote the transformation of high energy-consuming enterprises and promote industrial restructuring. Otherwise, we will face the same power shortage.